Free PDF of York: A Walk on the Wild Side 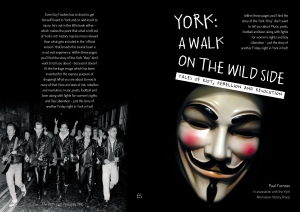 Following a wide range of press coverage this week in York Press and BBC Radio York – and some misunderstandings of the aims and content of Paul’s York: A Walk on the Wild Side book – we’ve decided the best thing is to make available freely the PDF. So if you’re interested in finding out what Paul’s really saying, then read away!

Some of the debate has been fair enough. Paul’s argument is that York’s official representations haven’t always celebrated and brought to life the richer and less marketable histories. And we’re not scared of the debate, after all the point of York’s Alternative History has always been to do cultural politics; to tell lots of different stories about the city’s past so that the future can be ours for the making. It’s been great to see that Paul’s work has done that job so well.

By PayPal: Add you address via PayPal to be posted the book. We can only sell the book for £5 each over the website (not for the multiple copies deal below).

York’s Alternative History are very proud to launch Paul Furness’ York: A Walk on the Wild Side based on walks Paul has run over the past couple of years. For a taster see this Guardian Northern blog.

In the author’s words:

Even Guy Fawkes has to shout to get himself heard in York and, to add insult to injury, he’s not in this little book either – which makes the point that what is left out of York’s rich history may be more relevant than what gets included in the “official version” that brands this tourist town a must visit experience. Within these pages you’ll find the story of the York “they” don’t want to tell you about – because it doesn’t fit the heritage image which has been invented for the express purpose of shopping! What you are about to read is none of that. Here are tales of riot, rebellion and revolution, music, poets, football and beer along with fights for women’s rights and Gay Liberation – just the story of another Friday night in York in fact!

York: Walk On The Wild Side is supported by York’s Alternative History and the University of Leeds and is supported by the Arts and Humanities Research Council, through a research project ‘How should decisions about heritage be made?’ / York: Living with History project.

We are now full booked up for this event. if you’d like to be on a waiting list for any ticket returns or if you’d like to buy a copy of York: A Walk on the Wilde Side (£5), then contact yorklivingwithhistory@gmail.com

Join us in the state room at the Mansion House to celebrate 2014’s amazing community history and heritage projects and to look ahead to what’s coming up in 2015.

The World Turned Upside Down: Radical Ideas During the English Revolution, by York-born Christopher Hill, is one of the most famous of a wave of radical histories written in the late 20th century – all of which place the emphasis not on kings and elites but on history from the perspective of the people, ‘from below’. This event aims to celebrate and inspire histories of York not-often told and histories told by people who live here.

As part of the event we will also be launching York: A Walk on the Wild Side: Tales of Riots, Rebellion and Revolution by Paul Furness – in which Christopher Hill’s York story is told. Alongside Paul a range of different people and projects will do a 3 minute turn to get you excited and inspired for 2015. We will plan this a bit like a history-version of an open mike night…so if you have something you want to shout about let us know!

Richard Brigham and Lianne Brigham, ‘York Past and Present’

Paul Furness, ‘Introducing…York: A Walk on the Wild Side: Tales of Riots, Rebellion and Revolution

This event is organized by York’s Alternative History and the University of Leeds and is supported by the Arts and Humanities Research Council, through a research project ‘How should decisions about heritage be made?’ / York: Living with History project.

The next open meeting of York’s Alternative History will be at the Golden Ball, Cromwell Road, York on Wednesday 24 July from 7 to 9 pm. You are all welcome!

During the past week, the Rowntree Foundation, the York Press and the Archbishop of York, John Sentamu, have each drawn attention to the poverty and hardship that underlies and, through high rents and low pay, underpins the superficial prosperity of the City. York continues its transition from a manufacturing centre to a twin-track economic structure in which a low-paid sector provides services to tourism, finance and a high-tech and academic elite. As factories close, cafes and restaurants seem to mushroom.

Much of this false economy, which includes the East Coast Main Line commuters attracted to live here while working in London, exploits a fanciful and skewed interpretation of York’s historic fabric. What is superficially entertaining and good to look at is foregrounded, while submerging and ignoring the ordinary people of York and their experience – not just in the past, but equally in the present and in formulating policies for the future.

Challenging this ‘chocolate-box’ version of York’s past is what YAH is all about. We campaign about history and heritage in parallel with other forms of social and cultural activism. How the past is presented is part of today’s social problems and the prevalent inequality. We are planning events for more than a year ahead and welcome new ideas to help us shape our agenda and make our small voice louder and more colourful. Help us plan this year how to challenge the way Guy Fawkes is presented and next year how the ‘Great War’ to end all wars is going to be commemorated. Help us devise a programme of public talks, events and interventions. See you on Wednesday!

York’s Alternative History and York Social Pub Talks joined forces last night, 20 May, at the Golden Ball pub, to present Krista Cowman[1] speaking on ‘Suffragette Militancy in the Regions’, sparking off a lively question and answer session and discussion to follow. The event was in commemoration of the time in June 1913 when Emily Wilding Davidson fell in front of the King’s horse at the Epsom Derby, dying of her injuries a few days later. We were also celebrating the less well-documented bravery of thousands of women, including several from the York area, risking reputations, health and their lives for the right to have their voices heard in British political life.

Succinctly and entertainingly, Krista Cowman explained the context and reasoning behind the growing militancy of the suffragette movement in the years preceding the First World War. She drew attention to the risks the women took, to their extraordinary personal courage and, quite naturally, this posed the question as to whether their militancy and superb organisation achieved worthwhile results. Questions and discussion centred around the issues of success and organisation, and it is fair to say that the debate continues. Issues in history like this are never definitively resolved, though they are always relevant.

I would note a few personal observations. Without the combination of firm resolve and dedication, backed with a highly effective national network of supporters, the women’s suffrage movement could not have supported the degree of militant activity they undertook. That is a lesson for today’s advocates of ‘direct action’ and civil disobedience, in the absence of any such background organisation. Equally interesting and relevant to today’s movements was the way in which the police authorities evolved new methods of surveillance in response to the women’s suffrage movement, at one point seizing the WSPU’s records, which were never returned. No matter how today’s movements organise, the police will find ways of adapting their tactics and strategies to protect the interests of the State and the status quo. Witness present-day debates about infiltration of groups, abuse of personal relationships (not just by the police, it is fair to say) and kettling of peaceful demonstrations.

For certain, the WSPU and its offshoots and rivals remain a quite amazingly relevant focus of debate about how best to organise for a better world. Krista provided some useful advice on the sources of information in public and private archives for those willing to the research.

Krista Cowman set the bar high for whoever undertakes the next joint talk we host! Log on to this site for future events.

[1] Krista Cowman is Professor of History at the University of Lincoln, a founder member of the Women’s History Network, and author of numerous publications, including the Borthwick pamphlet on Suffragette Militancy in York.

Krista Cowman, Professor of History, University of Lincoln, will introduce a pub discussion on “Suffragette Militancy in the Regions”.

Where: The Garden Room at The Golden Ball on Cromwell Road, York.

A century ago, the Suffragette movement in Britain took to direct action as part of their strategy to have women’s voices heard. On 4 June 1913, Emily Wilding Davison stepped in front of the King’s horse at the Derby and died of her injuries. In memory of her and the many other brave women who risked everything for the right to vote in parliamentary elections, we invite you to hear about some of the less well known activists and their role. Come and discuss how far the women’s movement has come in 100 years, how much remains to be done and what can be learned from the past.

Krista Cowman is a founder member of the Women’s History Network and has published widely on women’s political movements and their use of history as a means of creating a strong political identity. Among her publications is “The Militant Suffragette Movement in York” (Borthwick Publications, 2007).

[Afterwards, York’s Alternative History will discuss any ongoing work we are doing and everyone is invited to participate]

Hi folks! Check out the new Gallery page (see tab at the top). Underneath you will find three pages of photos selected from scores taken during York’s strictly unofficial 19 January commemorative events for the Luddites.